Tune in to Digging Deep Every Wednesday 7:00 pm

The Valley Experience is Live Every Sunday 9:00 am 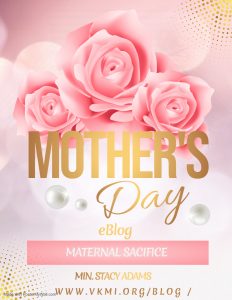 As we honor mothers this month, let’s remember their purest characteristic…sacrifice. From the beginning of time, mothers – true mothers, have sacrificed their time, energy, money, emotions and sometimes safety, all for their children. As far back as the Old Testament, we can see examples of real sacrificial moms.

Moses’ mother was left unnamed in the scriptures. Yet, she risked everything to save him from Pharaoh’s decree to kill all newborn Hebrew boys.

“And the woman conceived and bare a son: and when she saw him that he was a goodly child, she hid him three months. And when she could no longer hide him, she took for him an ark of bulrushes, and daubed it with slime and with pitch, and put the child therein; and she laid it in the flags by the river’s brink. And his sister stood afar off, to wit what would be done to him.” (Exodus 2:2-4)

Then there was the story of two new mothers. They were harlots, roommates, and both single mothers of sons. One accidentally slept on her child and suffocated him to death. That same night, she swapped babies with the other woman without her knowing (sounds like a General Hospital plot, right?). When they confronted one another and couldn’t come to a truthful agreement, they stood before King Solomon for him to judge their case. And when the woman who lied refused to fess up, he wisely put them both to the test to see who really had the heart of a mother.

“Then the king said, “Bring me a sword.” So they brought a sword for the king. He then gave an order: “Cut the living child in two and give half to one and half to the other.” The woman whose son was alive was deeply moved out of love for her son and said to the king, “Please, my lord, give her the living baby! Don’t kill him!” But the other said, “Neither I nor you shall have him. Cut him in two!” Then the king gave his ruling: “Give the living baby to the first woman. Do not kill him; she is his mother.”’ (1 Kings 3:24-27)

The real mother was willing to sacrifice raising her own son rather than watch him suffer death.

When we fast forward to today, we still see mothers making sacrifices for their children. Unfortunately, the stakes have gone up from working overtime to pay for a new pair of shoes to sometimes even sacrificing motherhood itself.

We can only imagine how much the mothers of Daunte Wright and Adam Toledo (recent victims of police shootings) can relate to the anguish of our Old Testament moms. Yes, times may have changed but the sacrifice of a mother remains the same. Then and now, they each were faced with unwanted circumstances that threatened – and in some cases took away—the lives of their children.

Admittedly, these may be extreme examples of what mothers endure. But when put to the test, we can dare to think, eFam, that there’s no limit to a real mother’s love. Case in point, Mary, the mother of Jesus.

Mary literally carried the Son of God in her womb. She knew He was born to save the world from sin. She knew from the beginning that one day He would be the sacrificial lamb. But perhaps she didn’t know all the details from the start. Maybe Mary didn’t know exactly how the story would play out. Yet still, she didn’t flinch. She didn’t back out when things got rough. She was right there for her child until the very end.

“Near the cross of Jesus stood his mother, his mother’s sister, Mary the wife of Clopas, and Mary Magdalene.  When Jesus saw his mother there, and the disciple whom he loved standing nearby, he said to her, “Woman, here is your son.”’ (John 19:25-26)

Who but a mother could stand and watch this ultimate sacrifice?

This year eFam, let us celebrate real mothers. Whether by birth, adoption, or spiritual covering; present with us or with the Lord, let us honor their hearts and unique sacrifice for us. Thank God for our mothers – I know I sure do.