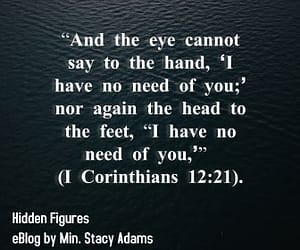 There was a film released a few years back called, “Hidden Figures.” The title was a nod to the scientific calculations needed to successfully launch the first man to the moon and return him safely from orbit. It was also an intended pun describing the women who were hidden from history despite their pivotal role in making that daring feat a reality. These women–three Black women–had matriculated through school, practiced their skills, and worked diligently to prepare for that moment. Katherine Johnson, Dorothy Vaughan, and Mary Jackson were there all the time, but living behind the scenes of one of history’s greatest moments.

Remembering this film causes one to wonder who are the hidden figures of this moment in time? Who are the ones who’ve studied the Word, practiced its principles, and prepared in their “now” season, for their “next” season?

As Apostle H. Daniel Wilson, Pastor Ray Bady, and others have been teaching eFam, who among us has diligently positioned ourselves to move from being hidden figures to being key players in the next move of God?

Some of us may not have titles or key roles in the physical edifice called Valley Kingdom Ministries International. We may not even hold the top title at our job, in our community, or on our family tree. Yet, we all have purpose and a part to play in God’s Kingdom. We all have a sphere of influence no matter how small.

Unlike man, God doesn’t want any of us to be overlooked in history. In His eyes, we’re a collective body and all our parts are necessary to move the body of Christ ahead. “And the eye cannot say to the hand, ‘I have no need of you;’ nor again the head to the feet, “I have no need of you,’” (I Corinthians 12:21).

Many of us eFam have been in hiding long enough! We could be the very answer to someone else’s prayers. We could be the hands or legs someone else needs to give movement to their lives. Yet, instead of acting on the “next” thing God’s asking us to do, we sit still and in turn hinder others from moving forward too.

Why do we do this? The first thing that comes to mind is fear. However, in this season, we’ve matured enough to know that fear is not what prevents us from moving forward; complacency and comfort do! Yes, the truth is that many of us have gotten comfortable and satisfied, while others are filled with complaints.

We can each self-identify where we land on this list. I know I can. But this should only remind us that we can’t afford the pleasure of playing things safe. We don’t have the luxury of resting on our past success, expecting someone else to step up, or even complaining when no one does anything at all.

“The tragedy of life is not found in failure but complacency. Not in your doing too much, but in doing too little. Not in your living above your means, but below your capacity. It’s not failure but aiming too low, that is life’s greatest tragedy.” ~ Dr. Benjamin E. Mays

Dr. Mays could have easily rested on the laurels of his career. He was a successful minister, professor, and even a civil rights activist. However, he knew that there was something more. In pursuit of his “next” season, he accepted the position as President of Morehouse College. He wasn’t a typical administrator who only handled the operations of the college. He dedicated nearly 30 years of his life to Morehouse, and personally mentored several students – one of whom later became the Rev. Dr. Martin Luther King, Jr.

What if Dr. Mays never stepped into his next season? What if he stayed hidden in his past achievements? The world may not have ever been blessed by his mentee, the world-renowned civil rights icon.

Now, we too must be perched and ready to come out of hiding. Who knows what the Lord has in store!