The Valley Experience is Live Every Sunday 9:00 am

Tune in to What's Happening Now Every Wednesday 7:00 pm 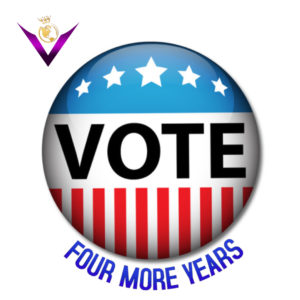 It’s election time again. Usually, the common mantra is four more years! This time, however, most people don’t want a repeat performance of the past four years.

Whether black, white or brown, e-Fam, we can likely agree that the last four years have culminated into a 2020 that none of us expected. Social unrest. Protesting. Looting. Wild fires. Back-to-back hurricanes, and yes, COVID-19 took us all by surprise. Yet, if we take an honest look back at America’s timeline since 2016, the stage was set and ready for the perfect storm.

We’ve witnessed all of this, plus what multiple reporters have called “disgraceful” presidential debates, and a President who makes a mockery out of a global pandemic that has caused 220,000 American deaths and counting – even after he too was diagnosed with COVID-19. Now, we find ourselves in the thick of another election season.

Some of us may be weary in the whole political process. Others may feel like, what’s the use – even when we do our part, the world is still going astray. But e-Fam, if we don’t want to see the past four years on rewind we must do our part. Matthew 5:16 says, “Let your light so shine before men, that they may see your good works, and glorify your Father which is in heaven.” It also says in James 2:20 that “faith without works is dead.”

Work isn’t a one-time thing. We don’t go to work just one day and expect to be paid for a lifetime. Work requires constant commitment, even when we don’t feel like it. In the current case of America, work right now for us as everyday citizens requires three key things.

The year 2020 has been a tipping point, a fork in the road. We have a choice whether to collectively elevate our voices beyond the mere cry of protests in the streets. We have a responsibility to activate our voices by our votes, and influencing others to do the same.

Share on facebook
Facebook
Share on google
Google+
Share on twitter
Twitter
Share on linkedin
LinkedIn
Share on pinterest
Pinterest
PrevPreviouseBlog: Social Justice: A Call of Duty
NextValley Kingdom Ministries International is a WORD church a WORKING church and a WORSHIP church Our mantra is we are a kingdom ministry that is advancing the kingdom for the king VKMI is a Kingdom minded cutting edge ministry that moves in the apostolic anointing and marketplace evangelism The Valley as we are affectionately called is a blessed church that operates out of two locations in the south suburban area of Chicago Our praise and worship is headed by the Double Gold Award ministry Shekinah Glory who brought you such songs as Praise Is What I Do How Deeply I Need You Yes and JesusNext

If you have a prayer request, please submit it to us: Our pray ministry “Tephillah” will pray for your request and intercede on your behalf.